Short Description:
The Sayl® Chair by Herman Miller® is a chair that wears its reputation as sculptural art on its sleeve, looking very much like the suspension bridges that inspired its design. 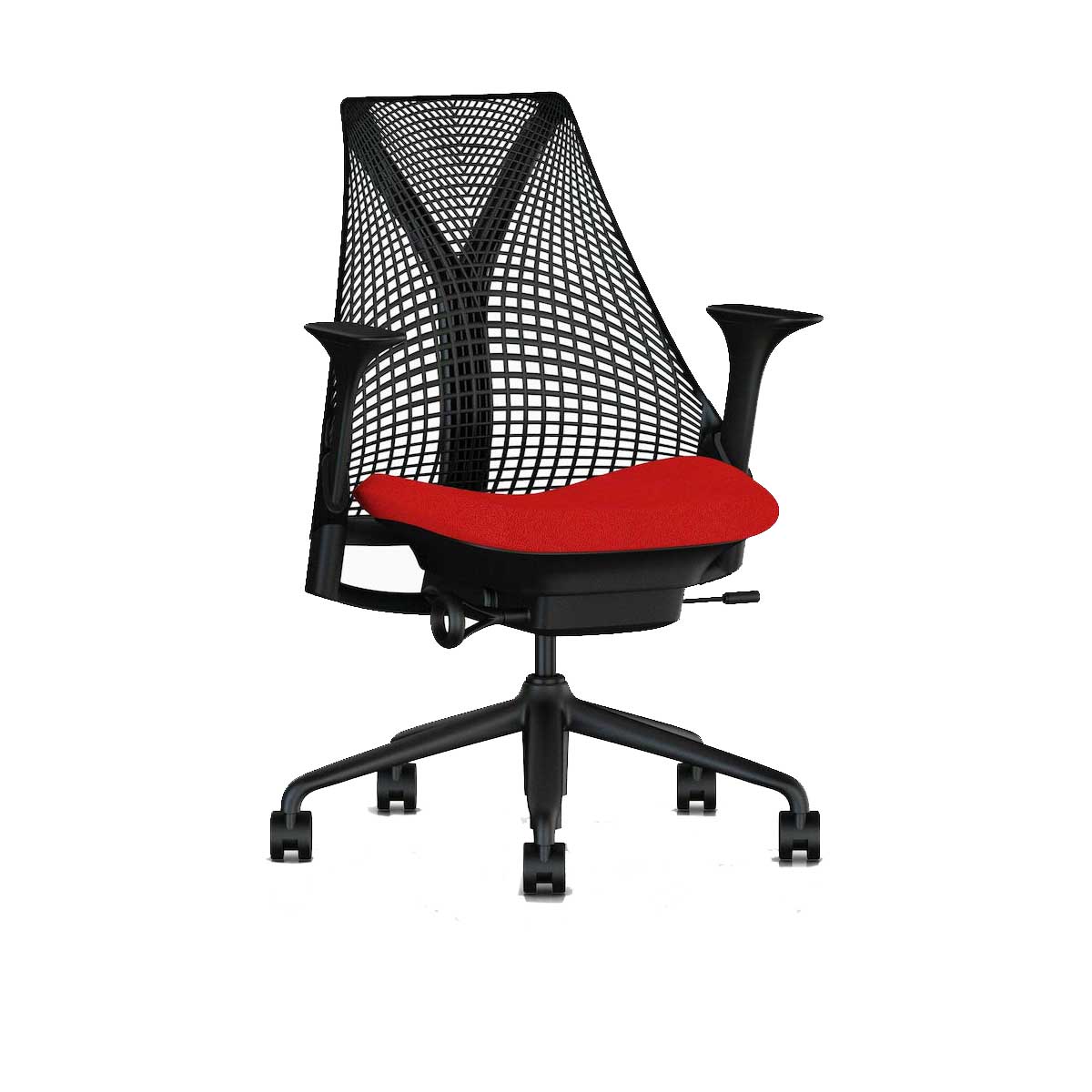 Need a chair today? Check out the Sayl Chairs we have in stock here. If you don't see a color or option here, please call our sales team at (800) 260-8420 for additional product selections!

Designed with a nod to suspension bridges - structures that deliver the most using the least material - the Sayl office chair combines high style, responsive support, and pioneering environmental responsibility.

Inspired by the Golden Gate Bridge, the Sayl® work chair makes a big impact with a small footprint. Its unique unframed back features elastomer strands that are stretched to provide the greatest tension where support is needed and less in areas that benefit from a greater range of motion. Speaking of motion, Sayl also features Harmonic Tilt technology, offering sitters a sense of balanced movement and support as they make moves throughout the workday. Plus, with no PVCs used, Sayl is up to 90% recyclable at the end of its long life.

Sayl’s unframed 3D Intelligent back features elastomer strands that are stretched to provide the greatest tension at points where support is needed and the least in areas that allow for the most expansive range of motion.

Visit our Shipping and Delivery page to learn more.

Yves Béhar is a thinker. And one thing he thinks about a lot is the future. You can see it in his designs—from his reflective red-lacquered laptop for Toshiba to his elegant closed-toe Footprints for Birkenstock to his refined Aliph Jawbone Headset for cell phones. “I believe design’s purpose is not only to show us the future, but to bring us the future,” he states.

The founder of fuseproject (“dedicated to the emotional experience of brands through storytelling”), Béhar has been exploring the design world since his childhood in Switzerland. “In Europe, it is double nature to evaluate objects based on how they work and how they look,” he explains.

Béhar grew up in a bicultural home, influenced by his East German mother and Turkish father. “One is functional and modernist and the other, expressive and poetic,” he says. “I always try to marry the two in my projects."

For a relatively young designer, he has had a remarkable career. A graduate of the Art Center College of Design, he started out working with high tech Silicon Valley clients such as Apple and Hewlett Packard, eventually gravitating into the sport, apparel, technology, and furniture arenas.

“In Europe, it is double nature to evaluate objects based on how they work and how they look” - Yves Béhar

One of the countless magazine articles written about Béhar called him “the multi-disciplinary designer of our time.” His long list of awards includes the prestigious National Design Award from the Cooper Hewitt Smithsonian National Design Museum, where his work is part of their permanent collection.

In 2004 he had two solo exhibitions, one at the San Francisco Museum of Modern Art and the other at the Musee de Design et D’arts Appliques Contemporains in Lausanne, Switzerland.

“When working with clients, my philosophy is to connect emotionally through ideas and content rather than style,” says Béhar. “It’s less about this or that aesthetic and more about meaningful conversations where people come to agreement in terms of approach and direction.”

His collaboration with Herman Miller came about through one such conversation. An admirer of Charles and Ray Eames, Béhar decided he wanted to do something for the company himself. “Design is very much at the center of Herman Miller’s culture,” he says. “So one day I just picked up the phone, called them, and said, ‘Let’s work together.’”

Given the wide range of products he works on, it would seem that Béhar might have a hard time escaping thoughts of design. Not at all, he says. “I have many outside interests that keep me balanced. For example, I love surfing, windsurfing, and snowboarding. So I spend a lot of time in the natural world, too.”

As for his future, Béhar says he’s very content designing products for companies who are “looking for departure, change, transformation. I’m continually excited working with people who want to move forward into the future and onto the next generation.”

From all indications, this is the man who can take them there.

Founded in West Michigan in 1905, Herman Miller has grown to become a world-recognized furniture brand. As a design leader and furniture innovator, they’ve partnered with some of the most influential and iconic designers of the 20th century—designers like Charles and Ray Eames, George Nelson, Isamu Noguchi, Alexander Girard and more. In doing so, they’ve produced pieces that have become classics of industrial design, many of which are featured on permanent display in museums like the New York Museum of Contemporary Art (MoMA).

Herman Miller continued that legacy in 1994 by partnering with designers Bill Stumpf and Don Chadwick. They went about developing an office chair unlike any before it. Bringing together the latest in ergonomic research and design, they developed the legendary Classic Aeron chair, the best selling office chair in the world.

Today, Herman Miller continues that tradition of design forward thinking and innovation. Partnering with the next generation of industrial designers—such as Studio 7.5 and Yves Behar— as they tackle the ergonomic and anthropometric challenges we face in today’s modern work life.

There are 5 different options for arms on an Aeron:

No Arms
Armless supports a variety of activities that require freedom of movement.

Fully-Adjustable Arms plus Armpad Depth
All the adjustments from the fully-adjustable arms with armpads that move forward and backward on the arms.

Recommendation
Most people choose the fully-adjustable arms because it allows you to rest your shoulders and maintain an ergonomic positure regardless of your height or desk.

Aeron comes standard with matching vinyl armpads. You can upgrade to leather armpads.
The Aeron Chair comes in 3 sizes: Small (A), Medium (B), and Large (C). Please refer to the sizing chart in the description section below to help to determine what size is best for your. The most common size is B.

Regardless of the tilt option selected, Aeron has a knob that allows you to set the tension of leaning back in the chair.

Standard Tilt
Standard Tilt comes with a tilt tension knob that allows you to adjust the amount of effort needed to recline comfortably while feeling balanced and supported. It does not have a tilt limiter mechanism.

Tilt Limiter
Tilt Limiter lets you limit the recline range between fully upright and fully reclined. The tension control lets you adjust the amount of effort needed to recline comfortably while feeling balanced and supported. Recline range can be adjusted to one of three settings: upright, mid-, and full-recline.

Tilt Limiter & Seat Angle
Tilt Limiter lets you limit the recline range between fully upright and fully reclined. The tension control lets you adjust the amount of effort needed to recline comfortably while feeling balanced and supported. Recline range can be limited at one of three postures: upright, mid-recline, or full-recline. Seat Angle Adjustment changes the angle of the seat from horizontal to a 5-degree forward tilt for people who sit at a slightly forward angle as they work.

Recommendation:
The most common reason for return is people choosing the standard tilt instead of the tilt limiter and seat angle configuration.

Adjustable Lumbar Support
Adjusts to support the natural curve of the lumbar region of your spine. Lumbar support can be adjusted vertically over a 4.5-inch range.

Adjustable PostureFit SL Support
SL refers to the sacral/lumbar region of the spine or the base of the spine up to the midback. Two individual pads flex independently; the top pad supports your lumbar, the bottom stabilizes your sacrum. System can be adjusted to fit the curve of your spine.

Questions? Chat with one of our associates today!