Short Description:
The Wireframe Sofa by designers Sam Hecht and Kim Colin reflects how we live today. Lightweight and versatile, Wireframe shifts with ease to meet the continually evolving needs of a space, and the people who work and relax in it. 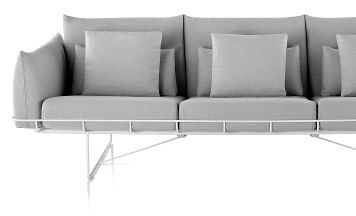 The Wireframe Sofa, with its external frame and removable cushions, is a nod to the common difficulties people tend to have with pieces of upholstered furniture. It seeks to remove those difficulties right at the outset, rather than one by one. The Herman Miller Wireframe Sofa's frame is formed from strong steel wire - long in use for furniture like the Eames Molded Plastic Chairs, and now adapted to serve as a stable platform for this three-seat sofa.

Each cushion can be independently removed, which makes cleaning a snap. Just remove and vacuum - and if the pillows need heavier treatment, you can just take them to be dry-cleaned. That's a lot easier than trying to lug a couch to the dry cleaners.
The Wireframe Sofa comes with three lumbar pillows and three throw pillows. That's a lot of included comfort.
The sofa features Herman Miller's Super-Seat suspension technology, which provides comfort and support across the sofa's width. No matter how you're seated, your pressure will be distributed evenly.

Last, but not least - the Wireframe Sofa is very light - both visually and physically. Most of us have gone through the experience of trying to move a big, heavy sofa up stairs or through a tight door frame. Well, just take the cushions out and move frame and cushions independent from one another. You probably won't need to measure your stairwell ever again. The Herman Miller Wireframe Sofa incorporates both old and new technologies to come up with a completely new way of making a sofa. It's comfortable, lightweight, and easy to live with. And isn't that the point?